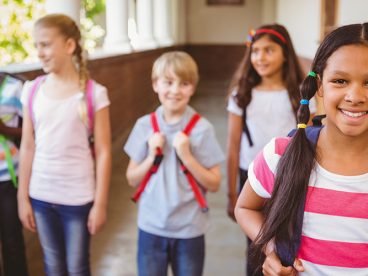 By Jessica Silvis, 2015 Get It Back Campaign Intern

The Earned Income Tax Credit (EITC) is a refundable tax benefit for low- and moderate-income working families. Income from the EITC helps families at every stage of life, including the school years.

Here are six ways the EITC helps kids in schools!

By providing extra family income, the EITC helps kids avoid disabilities and illnesses associated with child poverty such as obesity and diabetes. Healthier children attend school more consistently than sick ones and are more engaged in the classroom. Students in families receiving the EITC score higher on tests, especially in math. A large EITC can improve student achievement as much as two extra months of schooling! The EITC is designed to benefit low-income children of all ages and racial and ethnic groups, so it can help kids who might normally be at an educational disadvantage compared to their higher-income peers. The EITC is one of the largest anti-poverty programs in the country, bringing more than 3 million children out of poverty. The EITC lessens inequality and increases opportunities for low-income children. Children in families that receive larger tax credit refunds in their early years are more likely to either graduate from high-school or earn a GED, both important achievements as they look forward to colleges or careers. High school seniors from families who have received the EITC are more likely to enroll in college by age 19 or 20. The tax credit also helps working families get the money they need to pay the high costs of college tuition. 6. Benefits the next generation and beyond.

The positive effects of the EITC stick with children as they enter adulthood and help them to set their own children up for academic success.  This way, the educational benefits of the EITC carry on for generations to come.