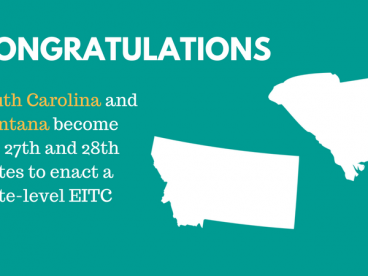 This Week’s Must Read: SC and MT Enact State EITCs Hawaii’s House and Senate passed a bill to create a state EITC, which the governor is likely to approve. Hawaii’s nonrefundable EITC would be 20 percent of the federal credit.

Expanding the EITC, including for childless workers under 25, would improve productivity and promote job creation, making everyone richer.

Jared Bernstein, former chief economist to Vice President Biden, recommends increasing the EITC as one way to address barriers to opportunity for low-income workers. An expansion of the credit should complement running a full-employment labor market, higher minimum wages, and reforming the criminal justice system.

CFED celebrates the successful work of VITA programs this tax season, despite challenges with the refund delay and new tax software.

New Mexico Congressperson Ben Ray Lujan introduced the Save for Success Act to help working families save for college. The refundable savings program offers a tax credit while the families save.

Andrew Benjamin survived lung cancer, but barely survived the 19 days in the hospital without taxes. Benjamin, who volunteers at Prepare and Prosper, is one of the happiest and most productive volunteer tax preparers, reports NBC.