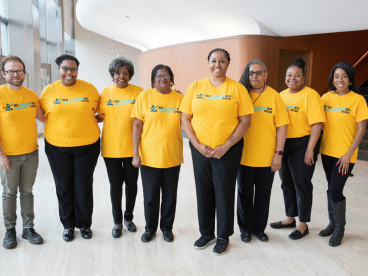 By Jordan Blakemore, 2020 Get It Back Campaign Intern, and Victoria Kovari, Detroit 2020 Census Campaign Executive Director

The City of Detroit, in coordination with over 300 partner organizations, has implemented a robust outreach and communication strategy to inform Detroiters about the census, why it matters, and the impact it has on their lives.

The city has recruited hundreds of local leaders and paid community canvassers in a data-driven field effort focused on hard-to-count census tracts or regions. The campaign will engage local, trusted messengers in a comprehensive digital and traditional media strategy designed to mobilize Detroiters to respond to the Census.

Historically, the Census has disproportionately undercounted people of color, immigrants, young children, and people living in poverty or homelessness. Many of these undercounted populations use VITA services, making VITA sites a great place to combat low census participation rates.

VITA sites across the city are distributing marketing materials and encouraging census participation with the use of kiosks where VITA clients can fill out the census.

The 2020 Census will be the first census to rely heavily on online responses, which risks undercounting those without internet access. Detroit will establish more than 100 locations with Census-form ready computers; including 50 sites with Census only kiosks, many of which are also VITA sites.

The census campaign has put up banners at kiosks sites including those serving VITA clients.  and VITA  volunteers have had training in order to answer questions that VITA clients may have about completing the census.  The Census campaign has also hired 12 community groups who will be canvassing neighborhoods with historically low census completion rates.   Over 110 Census Captains will also visit places where people congregate – such as local businesses, churches, and community centers .  The City campaign has engaged groups of local artists to host creative arts events around the city on April 1, National Census Day.

With a similar clientele and a common goal of creating better financial outcomes for the people of Detroit, the Detroit Census Campaign and Detroit VITA sites make a perfect partnership.

Effective messaging is vital to the success of the census and the funding the city will receive for many public assistance programs. Mayor Mike Duggan and the City of Detroit have both taken to Twitter, to express their commitment to supporting the census and the valuable tax credits that VITA sites help Detroiters claim.

Here are some recent tweets from the Mayor and the City highlighting the benefits of the EITC and the Census:

Here are some of the messages the Detroit “Be Counted Campaign” has used to inform people about the Census:

For more information about Census jobs, volunteering and other resources in Detroit, go to detroitmi.gov/census.