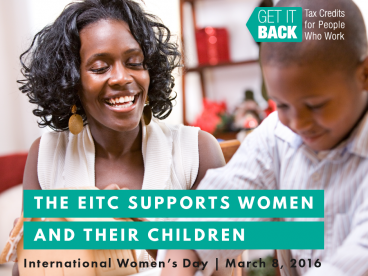 This year, the official UN theme is Planet 50-50 By 2030: Step It Up for Gender Equality. Step It Up asks governments to commit to closing the gender gap, from enacting legislation to investing in women.

One important aspect of ending the gender inequality gap is sealing the pay gap. Overall, women in the United States earn an average of only 78 cents for every dollar men are paid. However, this statistic masks the much greater wage deficit that women of color face: for every dollar paid to white men, African American women earn only 64 cents, American Indian and Alaska Native women receive 59 cents, and Latinas are paid 54 cents.

In 40 percent of families with children, mothers are the sole or primary breadwinner. More families than ever are relying on women. Still, women are not achieving economic parity.

The picture is even worse when you look at wealth. Single women only have 32 cents for every dollar of wealth owned by single men. For women of color, the situation gets direr: single African American women and single Hispanic women own less than a penny for every dollar owned by a single white man.

It is crucial that federal policy prioritizes alleviating the wage gap. Policies like paid family and medical leave and paid sick days help women take better care of themselves and their families. Since women make up a disproportionate segment of low-wage earners, raising the minimum wage would especially benefit women.

Fortunately, the Earned Income Tax Credit (EITC) and Child Tax Credit (CTC) are immensely effective at encouraging work, increasing earnings, and reducing poverty for women and their children. In 2013, the EITC and CTC lifted over 2 million mothers and 5 million children out of poverty.

Women of Color and the Gender Wage Gap